Jaisalmer, the city of palaces, is one of the most charming and exotic tourist destinations of Rajasthan. Known for its grandeur forts, Havelis (mansions), magnificent palaces and age old houses, Jaisalmer boasts of a rich historical tradition mirroring the valor and charisma of the Rajputana clan.

The city, which is a perfect amalgamation of the historic and medieval period, is also famous all over the world for its camel safaris, exotic sand dunes, sacred shrines, age-old museums and lakes. The city of Jaisalmer has innumerable tales to tell, facts to state, an exception to showcase and color to fill your soul with joy. Jaisalmer has been a major trading center from ancient times due to its strategic location on the camel trade routes. During the 19th century, merchants built Havelis all over the city, elegantly constructed using golden-yellow sandstone, which have created Jaisalmer’s identity as the ‘Golden City.’

Jaisalmer is so loaded with its cultural heritage that every corner of the city has a past to depict. Though it is a little tough to list all the places you simply cannot miss visiting whilst in the city, there are a few extremely famous places in Jaisalmer that even our school history books could not exclude.

Jaisalmer Fort: The second oldest fort in Rajasthan (the oldest being Chittorgarh), the Jaisalmer Fort rises from the very heart of the city atop the Trikuta hill. The fort was built by Raja Jaiswal in the year 1156 AD and is an embodiment of Indian architecture, design and military brilliance. 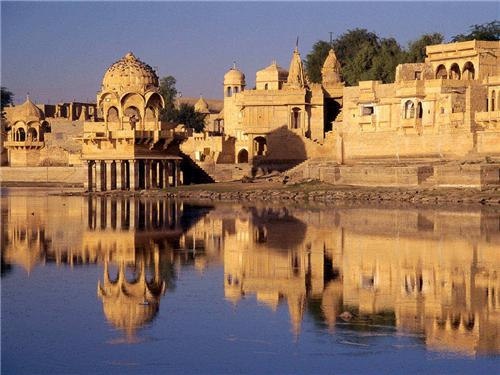 Patwon-ki-Haveli: One of the largest and most intricate Havelis in Jaisalmer, the Patwon-ki- Haveli was built by five brothers of the Jain religion between the year of 1800 and 1860. It is famous for its beautiful mirror work on the ceilings and wall as well as exquisite paintings of the bygone era.

Nathmalji-ki-Haveli: Built in the 19th century by two architect brothers, the Nathmalji-ki-Haveli is one of Jaisalmer’s most prominent tourist attractions. The Haveli mainly served as the residence of Diwan Mohata Nathmal, who was the Prime Minsiter of that place during that period.

Salim Singh-ki-Haveli: Built nearly 300 years ago, Salim Singh-ki-Haveli is named after its owner Salim Singh Mohta who served as the Prime Minister when Jaisalmer was the capital of the princely state. The haveli, a part of which is still occupied, has an elegantly arched roof with impeccable carved roofs in the shape of peacocks.

Museums: Jaisalmer boasts of numerous museums which home goods and antiques some of which are as old as a hundred and fifty million years, giving tourists a glimpse of the city’s rich historical heritage. The Government Museum is situated on the western bounds of the Jaisalmer Fort and was opened during 1984. The Folklore Museum was founded by a local connoisseur named N.K. Sharma in the year 1984. It is situated on the bank of Gadsisar Lake in Mehar Bagh.

Gadi Sagar Lake: A rain-water lake, Gadi Sagar is situated in the southern part of Jaisalmer and supplies water to the entire city. The banks of the lake are surrounded by temples, Chattris and holy shrines. A very interesting fact of this lake is that it is never dry despite being in the middle of a desert, as it is fed by the Indira Gandhi Canal.

Desert safari: You cannot leave this desert city without a desert safari. Tourists seldom miss out on the camelback rides that give them the feel of once what was a hobby of the royal Rajputs. Jeep safaris are also available with the ideal places being Sam Sand Dunes and Phalodi, while one can also opt for such safaris in the Desert National Park. Desert festivals are also organized during the month of February and March.

These were just a few of the famous tourist spots around Jaisalmer which you cannot miss visiting if you are in the city. There are numerous other havelis, palaces, museums and tourist attractions that will leave you with memories of a grandeur past of the Rajputana sect. 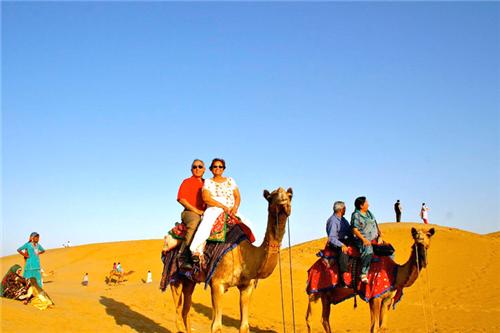 How to Reach Jaisalmer

By Air: The nearest airport to Jaisalmer is the Jodhpur Airport (appox. 285 kilometers). One has to take a train, bus or book a cab/taxi to reach Jiasalmer. Jaisalmer has its own airport but it only serves military purposes and is not used for commercial uses.

By Train: Jaisalmer is well connected by trains. There are several trains to and from the city. There are direct trains from the Jaisalmer Railway Station to Jodhpur and Delhi, and vice-versa.

By Road: Jaisalmer’s road network is good with buses running from the city to other important cities of Rajasthan. One can also reach Jaisalmer as well as tour around the city by hiring a taxi or jeep.

Eating Out in Jaisalmer

Jaisalmer will serve you with a wide variety of cuisines to choose from but tourists usually prefer traditional food. Local food is dominated by vegetarian delicacies, including the famous Daal-Baati and Churma, but there are non-vegetarian dishes too like the 'Laal Maas' and 'Junglee Maas.’ 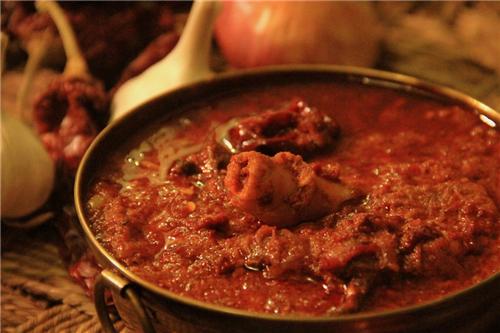 Keeping in mind the different kinds of tourists visiting Jaisalmer, one can choose from high-end to budget restaurants that serve both traditional and continental food, including Chinese, Italian, Mexican, etc. Some of the famous eateries in Jaisalmer which tourists can check out are the Trio Restaurant, Chokhi Dhani, Vyas Meal Service, and more.

Best Places to Stay in Jaisalmer

Accommodation too can be categorized according to one’s pocket. There are luxury/deluxe hotels to standard economy ones. If you want your stay to be as royal as the Rajputs, book rooms in 5 Star and luxury hotels like Fort Rajwada, Suryagargh and Rang Mahal. Meanwhile, if you want to save a little on accommodation, opt for budget hotels like Hotel Priya, Hotel Moonlight, and many more.

If you think Jaisalmer is all about historical monuments and forts, you will be in for a surprise. Shopping in this golden city will consume a huge part of your itinerary. Jaisalmer has one of the best marketplaces that sell a wide range of traditional goods such as handicrafts, textile, art and crafts, jewelry and a lot more.

No tourist leaves Jaisalmer without visiting the Manak Chowk, Sardar Bazaar, Bhatia Bazaar and Sonaron Ka Baas, while famous shops include Khaidi Gramodyog Bhavan, Rajasthali, Light Of The East and many more.


The Bhang Shop: Well, yes..! ‘The Bhang Shop’ in Jaisalmer is too famous among tourists. This government authorized shop just outside the city gate sells bhang lassi, bhang cookies, bhang sweets and bhang cakes! Do check this place out even if you have no intention to try these bhang recipes! 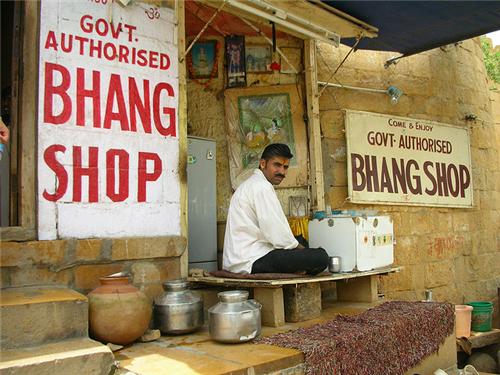 Though the city is bustling with tourists throughout the year, the best time to visit Jaisalmer is from October to March so as to avoid the scorching temperatures in the desert city.