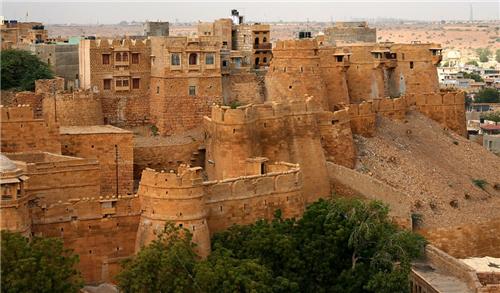 The city of Jiasalmer was founded by a Bhatti Rajput ruler named Raja Rawal Jaisal in approximately 1156 AD atop of the Trikut hill, mainly to shift his capital to a safer place to avoid infringement of enemies. Prior to this, the Bhatti Rajput clan’s capital was situated in Lodhruva, situated nearly 15 kilometers to the south east of Jaisalmer.

Like most of the histories of Rajasthani cities, Jaisalmer too comes with a legendary episode. It is said that Lord Krishna, who was the chief of the Yadav clan, had predicted that a future descendant of his family will establish an incredible kingdom on top of the Trikuta Hill someday. During the 12th Century, Raja Rawal Jaisal, a descendant of the Yadav clan, visited Jaisalmer to seek the blessings of a siege Eesul, who told the Maharawal about Lord Krishna’s predictions. On the seige’s advice, Raja Jaisal is said to have shifted his capital from Lodhruva, thus forming the city of Jaisalmer.

The Rise of Jaisalmer

After the Jaisalmer Fort was nestled atop the Trikuta Hill, Raja Jaisal started imposing taxes on the camel caravans that passed through the neighboring route. The trading caravans, loaded with expensive silks and exotic spices, were actually en route to Sind or Delhi but had to travel directly via Jisalmer. Jaisalmer’s strategic location brought the city immense wealth for years, with the two routes connecting India to Egypt, Africa, Persia and the western nations facilitating trade in the region. Meanwhile, Jaisalmer’s location also prevented it from invasion of foreign rulers.

A significant period in the city’s history began when the rulers of Jaisalmer, who were attributed to as ‘Rawals,’ engaged in a nine-year long war with Ala-ud-din Khilji, a Turk Afghan ruler, during the 13th and the 14th Century. Apparently, Ala-ud-din Khilji was annoyed with the Bhatti Rajput rulers as they had stopped and looted one of his caravans en route to Sind carrying royal coffer. The fall of Rajputs seemed prominent after nine years of siege, which led to the womenfolk of Jaisalmer committing Jauhar (self immolation), to avoid falling in the hands of enemies.

The son of Raja Jaisimha, Duda, is said to have fought fervently during the battle but was conquered following a hand to hand fight. Though he died fighting, his descendants continued to rule Jaislamer under a new agreement with the Mughal rulers of Delhi. They again engulfed in a war with Emperor Humayun and lost, and since then maintained a cordial relationship with the Delhi Sultanate. Later, Shah Jahan awarded Sabala Simha the royal patronage of Jaisalmer owing to his gallant contribution in the Battle of Peshawar.

Jiasalmer’s reputation as a hard nut to crack continued even in the modern era. The city was the last of the Rajputana royal clans to ink the British 'Instrument of Agreement,’ which was a precursor to Britain’s colonial rule in India. The agreement was entered into after long hours of negotiation and a lot of persuasion by the British establishment in India. After India’s independence in 1947, the Rajput royals signed an agreement to be a part of the freed country.

Even today, local bards, bhaals and carans sing the history of Jaisalmer in the form of ballads. Nevertheless, the city lost its economic significance after the port city of Mumbai was established, while it also lost the trade routes that passed through Pakistan post India’s independence. At present, Jiasalmer is considered a cultural hub of western India as well as a key tourist destination.