Jaisalmer had been one of the front row cities of Rajasthan since ancient times, due to its international trade and commerce. The city had witnessed various rulers’ domination starting from the Rajputs to the Mughals and finally the British. During the Rajputana reign, Jaisalmer was at its epitome of glory and it is visible through the innumerable architectural brilliance spread across the place. Even with the Mughal rule, Jaisalmer had seen some of the best Islamic structural designs. During this Islamic rule, the formation of Havelis came into existence.

“Haveli” is an Arabic word which means a private mansion. During the 18th and 19th century, Jaisalmer had many remarkable sand stone mansions built by the rich merchants. These Havelis beautifully carved yellow sandstone facades, jali screens and huge decorated windows. Tourists will get awestruck by the massiveness of these mansions and the elegance of the artwork presented by the Silavats, a community of masons.

Here all the worth visiting Havelis of Jaisalmer has been portrayed in a summary. 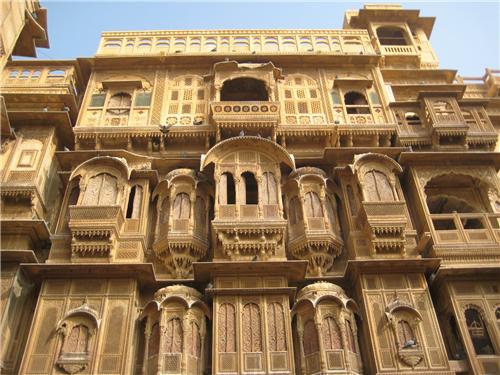 The Patwon ki Haveli (Mansion of the Brocade Merchant) is the first haveli of the region and has gained importance due to its magnificence and largeness. In 1805, Guman Chand Patwa, a rich Jain merchant of jewels and brocade commissioned this haveli. The significance of this haveli is that the structure is a 5 storied building. Each of the storeys is in its own a complete haveli with all the grandeur. Guman Patwa made them for each of his five sons. The perfect latticework on the balconies, exquisitely carved pillars, gorgeous chambers and long decorated corridors has made the place popular among the shutterbugs. The inside walls are decorated with handmade frescos made of red and gold colour. The 60 decorated sandstone balconies are so finely carved, that they look like woodwork from a distance. The haveli portrays the picture of the then richness of the merchants of historic era. 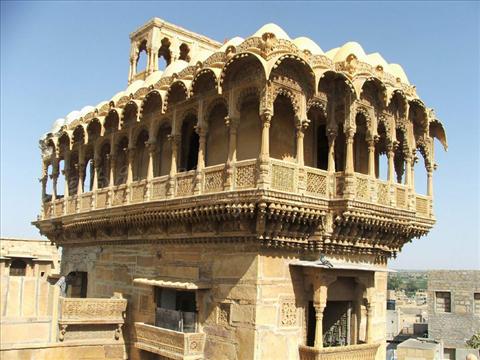 Situated at the base of the Trikuta Hills is the beautiful Haveli of Salim Singh, the Rajput Prime Minister in 1815. The stunning blue peacock work at the edge of the arched projected balconies, the decorated roof, the intricate carvings on the haveli walls are worth to be appreciated and etched forever in tourists’ mind. Salim Singh made this haveli of 3 storeys and the grandeur made it look almost like a palace of those times. 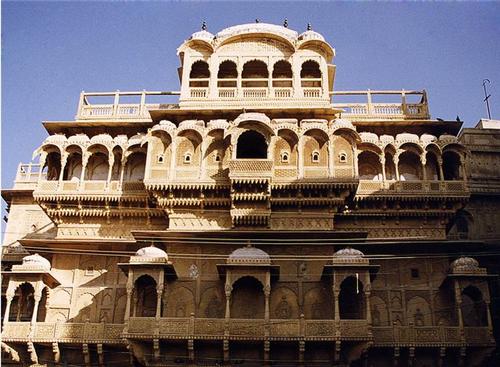 This haveli was built for the prime ministers of the state in the late 19th century. The haveli displays the intricate craftsmanship of the Silavats of the bygone era. The mansion was built by two brothers, Hathu and Lallu, who had used their artistic magic to create the left wing an exact replica of the right wing. Travellers may get awestruck thinking that there is a life-size mirror put in between the wings inside haveli. Two yellow sandstone elephants guard the entrance to this yellow sandstone haveli. It has a highly decorative facade with the interior walls designed with impressive miniature paintings of flowers, birds, soldiers, elephants, bicycle as well as a steam engine.

All these Havelis are within the city and auto rickshaws can be availed to reach these destinations. One must remember that due to electricity problem the Havelis close after 5pm everyday. Hence morning visit is advisable in case you are planning a visit. Tourists carrying cameras may have to pay a certain ticket price and it is advisable to avoid flash within these Havelis, as the flash light is proven harmful for these historical artworks.