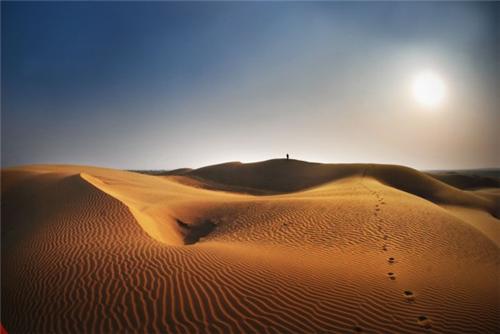 (image courtesy - www.adventuresofagoodman.com)
Jaisalmer rises from the heart of the Thar Desert and was awarded the status of an independent district on 6th December 1949. It is the largest district of Rajasthan and the 33rd largest in India. The city is located at Latitude 26.9, Longitude 70.9, spreads over an area of nearly 38401 square kilometers and shares its border with Jodhpur District in the east. Jaisalmer is also surrounded by the districts of Bikaner and Barmer, while Pakistan lies on the north and north western frontier.

Jaisalmer is a dry, sandy and extremely hot region with the terrain, which falls within a radius of approximately 60 kilometers, being mostly rocky and stony. The region is barren and undulating due to the sand dunes and slopes towards the Rann of Kutch and the Indus Valley. The soil becomes lush green during the monsoon season even with the little amount of rain it receives. However, there is no perennial river in the entire district.

Though Jaisalmer comes under the desert climatic zone and is therefore characterized by scanty vegetation, it is not homogenous with respect to temperature, rainfall, topography, soil, resources endowment and agricultural conditions. There are certain differences in irrigation facilities, agricultural crops and pattern of land usage.

Though there is no perennial river in Jaisalmer, there exists a small river that flows for about 28 meters and eventually falls into a huge stretch of land to form a lake (jhil). The river is called Kakni while the lake is named Bhuj-Jhil. As scanty rainfall does not facilitate irrigation, the region can only grow rain crops such as Bajra, Jowar, Til and Motif. Wells, with a depth of nearly 250 feet, have been built across the city to offset the scarce of water.

Summer season - Usually stretches from March to August and is unbearably hot. The temperature lingers between 22° C to 42° Centigrade.

Monsoon season – Nearly 70% of the annual rainfall is received by Jaisalmer from July to September, with July witnessing the most rains. A little amount of rain is seen during June in the form of thunder showers.
Monsoon is as good as negligible due to the city’s positioning in the Thar Desert, with Jaisalmer remaining dry for most parts of the year. Western disturbance bring approximately 15 centimeters of rainfall every year.

Winter season - Generally begins from around mid-November and last until the end of February. Winters are much cooler in Jaisalmer with temperatures ranging between 36° to 8° Centigrade. 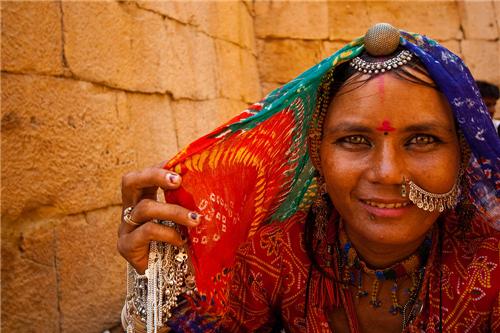 (image courtesy - www.tommyschultz.com)
As per the Census report of 2011, Jaisalmer has a population of 669,919. Of the total, 361,708 are male while 308,211 are female. A majority, or 85%, of the district’s population lives in rural areas, while most of its villages are spread across Jaisalmer in the form of small hamlets called ‘Dhani.’
The local language of Jaisalmer is Hindi, but people also speak Rajasthani. The district is divided into 656 Villages, 3 Tehsils and Panchayats.

Animals have to by force move from one place to another in lookout of food and water. Jaisalmer’s fauna consists of camel, cow, sheep, goat, jackals and boars, while poisonous snakes are frequently found in deserts.

The birds in this region include peacock, crow, pigeon and parrot, while a special attraction  in Jaisalmer is the white Palam birds.