Jaisalmer- a colorful city in Rajasthan replete with traditions, folk lore and interesting historical facts!  There are many things that draw tourists to this specific city of Rajasthan- its colors, clothes, markets, the dancing desert Queen as well as historical monuments. Very few people are aware of the fact that the place houses some of the most visited tourist spots of state of Rajasthan. Tourists mainly give precedence to the markets, the desert tours and palaces of the city but there are many other popular places in the town of Jaisalmer which are visited by tourists but are barely remembered by them.

One such tourist attraction is the Gadsisar Lake which was founded in the 14th century in the year 1367 by Maharaja Gadsi Singh of Jaisalmer. It was one of the firs efforts by a ruler of Rajasthan to implement the techniques of rainwater harvesting in one of the largest desert regions of the world-The Thar. It is still one of the largest rain water lakes of the state and has been a major source of water supply and conservation for the town of Jaisalmer. Although at present, it is gradually drying out due to the increasing demands of water for irrigation. 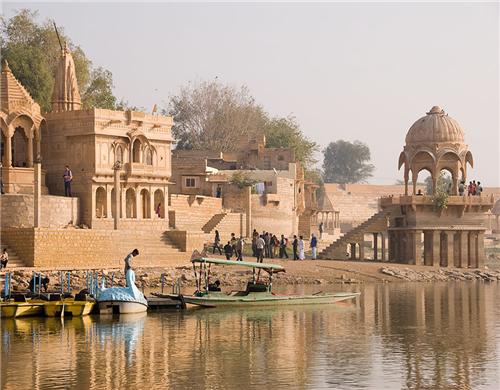 This semi-man-made lake is situated on the outskirts of the town making it an ideal place for escaping the deafening noises and maddening crowd of the markets of Jaisalmer. Since it is located quite close to the town of Bharatpur, which is abode to the largest bird sanctuaries of India, it attracts a number of birds belonging to different species. During the winter season, the migratory birds flock to the lake in large numbers which appears to be small sanctuary itself.

The lake is surrounded by many temples built by the kings and their shrines as well as dense vegetation making it an ideal place to relax and take memorable pictures home. At one of point of time the area had become a pilgrimage spot for people living in the surrounding areas of Jaisalmer. Later, in the 19th century a massive and beautiful arched gate was built by a famous royal courtesan, known as Tillon which led to the gate being named after her as Tillon ki Prol, meaning ‘The Gateway of Tillon’. The gateway can be seen from quite distance while walking down through the road to the Gadsisar Lake.  It added élan and eloquence to the entire lake with a pinch of royal elegance to it.

In the year 1908, a statue of Lord Vishnu was constructed along with the gateway which was referred to as a temple of Lord Krishna, so that the lake could be protected from demolition from the hands of the then Maharwal or rather Maharaja. 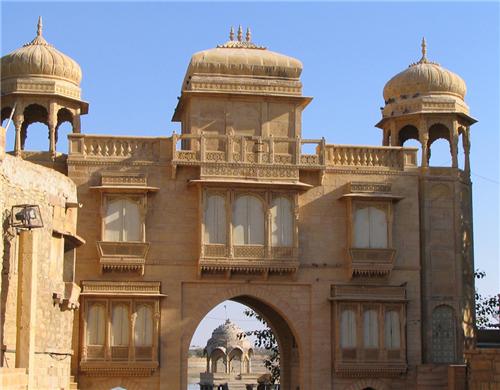 The gateway was constructed with the then popular yellow stones, which have also been used in the construction of the Umaid Bhawan of Jodhpur. Currently, even the gateway is considered to be a pilgrim spots since it was dedicated to Lord Krishna which was done against the wishes of the ruling Maharaja of Jaisalmer during the first decade of the 19th century.

Its the peace, quite, scenic beauty and greenery around this semi-natural lake that attracts pilgrims as well as tourists to it. So do not forget your cameras at the hotel while visiting this place and time your visit in the winter season to get the maximum out of the place.