Like every region in India, Jaisalmer too celebrates every festival with a lot of fervor and enthusiasm. Apart from the customary festivals like Holi and Diwali, the city celebrates some unique festivals and fairs of its own. A region that still holds on to its roots when the entire country is undergoing such modernization, festivals in Jaisalmer too still smell the same like they did in the bygone era.

The Desert Festival, also called the Rajasthan Desert Festival, is held in the months of January-February when the otherwise barren city of Jaisalmer showcases its exuberant charm. The three day festival not only attracts a large crowd of locals but also tourists from all over the world flock to the desert city to experience Jaisalmer’s delightful spirit. The Desert Festival, a celebration of all that Jaisalmer symbolizes, is held at the Sam Sand Dunes that is located 42 kilometers away from the main city. People dress up in colorful clothes to take part in the event, which consists of several cultural events, folk performances, camel races, competitions, etc.

One can expect women dressed in colorful traditional costumes, performing folk dances such as Ghooomar and Kalbeliya, men singing in high pitched voices, majestic elephants and camels adorned with colors and paintings, puppets showcasing ballads of bravery and love, and a lot more of the rich Rajasthani culture during the three-day event.

Adding more excitement to this traditional festival are contests like Mr. Desert and the turban-tying competition, while crowds are left awe-struck with performances of the traditional fire-dancers and well-known Gair dancers. The Desert Festival is ended in a grand manner with a trip to the sand dunes where people can take camel rides and while doing so watch dancers and musicians performing on the dunes. Apart from camel safaris, tourists can also take SUVs to reach the venue. Know more 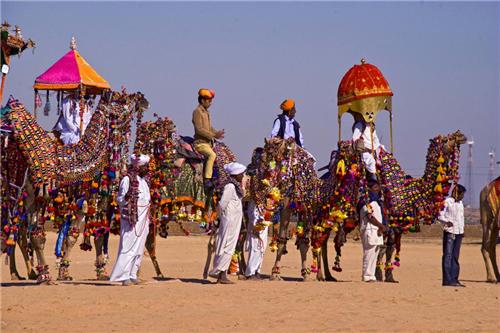 Basant Panchmi is a festival celebrated in the month of February to worship Goddess Saraswati. Every household in Jaisalmer performs special Pujas during this festival, while devotees apply a special ‘teeka’ on their forehead during this time. Meanwhile, women prepare mouth-watering dishes and sweets to add a touch of flavor to the festival. Basant Panchami also marks the end of winter season and advent of spring season. Know more...

Gangaur is a festival celebrated in entire Rajasthan and with a lot of zest in Jaisalmer too. The Gangaur festival is celebrated by Rajasthani women in the month of March, which stretches for a period of 18 days.

Like Gana is a name of Lord Shiva, Gaur is also another name for Gauri, his wife Goddess Parvati. Married women celebrate Gangaur to seek marital happiness, while unmarried women celebrate it to pray for good husbands. In the first few days, women worship Goddess Parvati, light lamps, sing and dance, while the last day is marked by a procession. During the festival, idols of Lord Shiva and Parvati are decorated, which are later immersed in a water body on the last day of Gangaur festival. Know more... 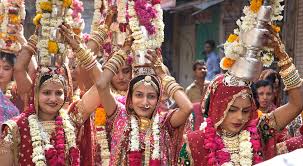 The village of Ramdevra in Jaisalmer, located nearly 12 kilometers to the north of Pokaran, is named after Baba Ramdev. Baba Ramdev was a Tanwar Rajput and a saint who took Samadhi, which means conscious exit from the mortal body, during 1458 AD. The saint possessed miraculous powers and his fame was far-reached. As the legend goes, five Pirs from Mecca came to the village to test Baba Ramdev’s power and later paid their reverence to him after being convinced of his powers. Since then, Muslims also respect Baba Ramdev as Ram Shah Pir, while Hindus consider him as a reincarnation of Lord Krishna.

During Bhadon Sudi 11 (August - September), a large-scale fare is held where lakhs of devotees take part from far-flung places. Devotees swarm to Baba Ramdev’s temple during this time irrespective of their religious affiliations, caste or creed. People sing Bhajans and Kirtans all night long to pay homage to the saint. However, there is one particular aspect to note here, people visiting Ramdevra are not permitted to indulge in vices.