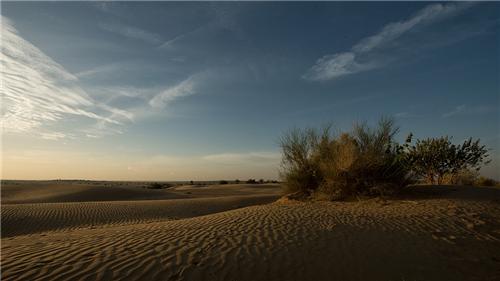 (source: Flickr)
Covering an area of more than 3000 square kilometres, Desert National Park in Jaisalmer is one of the largest of its kind in the country. With salt lake bottoms and craggy rocks as the salient features of its landform, the national park is considered to be one of the best examples of the Thar ecosystem – the fact that nearly one-fifth of the park is covered by sand dunes, makes it an ideal microcosm of the largest desert in India. The park finds the Great Rann of Kutch at its southern border and the sub-Himalayan plains in the north.

Information in a nutshell

The Desert National Park is found to be in its richest avatar in the period between the months of November and January, every year. Tourists can expect to see the richest collection of flora and fauna, here, during this period.

From the lessons of our school days, most of us must fondly remember a species of bird known as The Great Indian Bustard – the Desert National Park’s numero uno attraction is this endangered species of bird, which is known to be present only in India. Even though the park is a treasure trove for various species of birds (some being migratory), The Great Indian Bustard attracts tourists and birdwatchers from all over the world, like no other. The Bustard, with its long and bare legs, can often be seen in its brownish white avatar near a water body in this park, known as the Sudasri waterhole.

Other varieties of birds found in the Desert National Park include falcons, vultures, eagles, buzzards and harriers. Besides, Blackbuck, Tawny Eagles, MacQueen’s Bustard, Spotted Eagles and Demoiselle Crane are some of the other well known species of birds found here.

Vegetation – As stated earlier, a typical outing in the Desert National Park shall produce a miniature version of the Thar Desert in Rajasthan. Thus, with sand dunes dominating the landscape here, vegetation is scanty – with the presence of Sewan Grass and Calotropis, besides craggy rocks and compact salt lake bottoms.  Interdunes can also be found in certain areas of the park – these are features formed by the action of wind on the vast barren land.

The rise in prominence of the Desert National Park in Jaisalmer, as a major tourist destination in the western Indian state of Rajasthan, was mainly accelerated by the growth in the Indian economy, at large, in the early days of the 21st century. The park is considered to be a paradise for bird lovers, from all over the world, who routinely make their way into the this place in the months of November, December and January every year. Jeep Safaris are available for tourists inside the park - these vehicles are readily motorable on the sandy and arid ground.