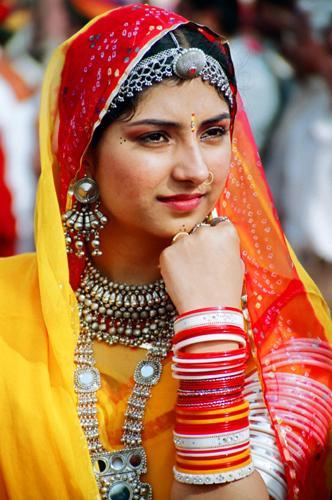 Jaisalmer is blessed with a colorful and vibrant culture that reflects the rich heritage of the bygone era. The desert city’s folk music and dance is an elemental part of its culture and an exceptional amalgamation of past traditions, different social customs and classical music. The culture, language and tradition of Jaisalmer are to quite an extent influenced by the culture of the neighboring area, Sind.

The city has so much to offer in terms of its culture, music, architecture, crafts and traditions that every year people from around the world flock to this wonderland to get a taste of the desert life. Irrespective of the adverse conditions faced by Jaisalmer in its terrain and climate, the people of this place look happy and satisfied with their lives and are extremely friendly and jovial by nature.

One has to visit Jaisalmer’s villages so as to get the real feel of desert life. Villages are situated far from the city with a majority of the population living in rural areas. The villagers mostly reside in huts (jhopris) made of grass. The key sources of income in the villages are farming and animal rearing. Generally, men go out for work while the women look after homes.

Religions in Jasalmer are a mix of numerous Hindus, Jains, Sikhs, Christians and Muslims. The city embodies within it the rich cultural heritage and traditional legacies of the Hindu religious community. A majority of the local native residents are descendants of the warrior groups of the Rajput clan who are ardent followers of Hindu customs and rituals.

Jaisalmer has a huge population of Marwaris who are firm followers of the Hindu traditions and customs, with Lord Shiva, Lord Vishnu and the Sun God holding a high place in the religious prayers offered by the region’s Hindu population. Festivals such as Holi, Shiv Ratri, Diwali, Dusshera and Karva-Chauth are celebrated in a lot of pomp and show among Marwaris.

Though Jaisalmer is painted golden from every corner, the mundane background is aptly broken by its colorfully dressed people. The people of Jaisalmer are generally seen dressed in bright colors like pinks, reds and yellows, along with elaborate, beautiful jewelry made of silver and brass.

The women are either dressed in Ghaghra Cholis or Sarees, with the Odhni forming an essential part of the overall attire of Rajasthani women. The Odhni is a long piece of cloth, the size generally being 3 meters by 2 meters, is worn with Ghaghra Cholis or Lehengas and also teamed up with a Saree during special ceremonious occasions.

The traditional dresses of males in Jaisalmer include Khol, Pachewara, Bugatari and Banda. Men are also seen wearing Dhotis and an Angrakhi or a Jhari, which is like a jacket worn to cover the upper body. A key aspect of the male costumes is their headgears, which is a characteristic feature of Rajasthani men in general. The Pagri, Potia, Saafa, Sela and Pencha are few of the commonly worn types of headgears.

Rajasthani is the most popular language spoken in Jaisalmer among the wide array of languages spoken in the district. The second-most popular language spoken here is Hindi, considering the huge Hindu population. Apart from these two languages, some residents also speak and write in Urdu. Meanwhile, more and more people in Jaisalmer can now speak and write in fluent English thanks to the modern education system. 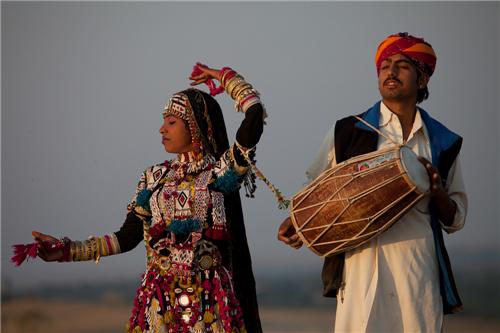 Music and Dance in Jaisalmer

A very important part of Jaisalmer’s rich cultural and social life is its music and dance. The folks dance and music of this region is being passed on from generations after generations and is a key attraction for tourists.

No cultural or social celebration in Jaisalmer is complete without the folk music and dance performed by highly skilled artists of this place. There are several native folk dance styles that Jaisalmer can boast of, the Kalbeliya dance style being one of them. This dance form is primarily performed by the community of snake charmers.

Other Prominent Dance Forms in Jaisalmer

Ghoomar Dance – This special dance form is performed by females on festive occasions.

Kathputli Dance – This dance form represents the unique cultural tradition of Jaisalmer, where organizers of the show use their creative imagination to arrange a dance drama of puppets to entertain the audience.

Architecture of the city

Jaisalmer in totality depicts the creative imagination and rich artistic skills of the region’s local craftsmen, with their rich architectural expertise seen in the Fort of Jaisalmer, Nathmalji-ki- Haveli, Salim Singh-ki- Haveli, Parsvanath Jain Temple and Chandraprabhu Temple. Most of the edifices in Jaisalmer are elegantly adorned with delicate and fine work. People from all over India and the world visit Jaisalmer to see its forts, palaces and religious shrines that bear astounding lattice work on their walls, pillars and ceilings. Some forts also have excellent wooden work that is worthy of mention.

Jaisalmer’s crafts include delicate embroidery work, traditional jewelry made of silver, beautifully crafted leather products, stone work and printing work. Most of the city’s inhabitants are highly skilled in craft and art work, and their work has received acclamation around the globe. 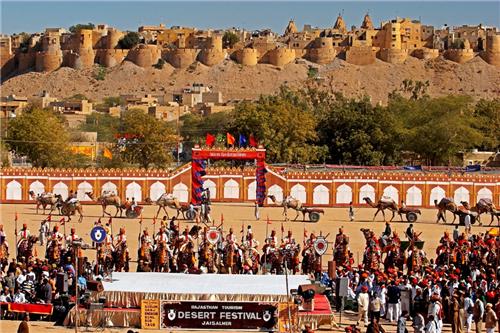 Fairs and Festivals in Jaisalmer

Desert Festival of Jaisalmer is celebrated in the month of February and runs for three days. The key attractions of this festival are folk dancers and singers performing on traditional Rajasthani tunes, ballads, puppet shows, snake charmers and acrobatics by natives and gymnasts, locally called Kalabaaz. The camel show is another thing you simply cannot miss during the Desert Festival. Know more...